Suddenly it's fall. The sky is heavy and rain threatens. We're coming back to good old rainy Olympia as we know and love it. Hoards of leaves will blanket the gardens very shortly. But, this year we were blessed with a ton of beautiful days which we rarely see at this time of year. We could bask in the sun at the cafe and take leisure on park benches. It has been good.
In summer at Olympia Zen Center, you cannot see beyond the rim of trees that encircle the temple grounds. Leaves are thick on the big leaf maples and they do not admit much sunshine. They've grown so huge in the ten years we've been here that we get less and less sun on the roof. Inside the house is natural air conditioning. This is good on the few days when we have very hot weather. Otherwise indoors it's a little bit cool for a good feel of summer.
On the other hand, the canopy is excellent for maintaining native plant species since there are fewer invasive weeds where the ground is protected from the sun. The tree seedlings bombard the earth attempting to restore itself to an evergreen forest which was the original condition of this area. A hundred years ago, logging occurred, a logging railroad was built through the area so plant life was disturbed. Big leaf maple and other deciduous trees infiltrated and pushed out the evergreens. What was natural however, will always attempt to restore itself. Thus, billions of evergreen seedlings land in open spaces every year and small cedars or pine make an attempt at maturity. Slowly we see new evergreen trees emerge and slowly we allow them their space. But, the forest is dark and we cannot expect the direct light of sunshine among tall trees. This is the nature of Washington. 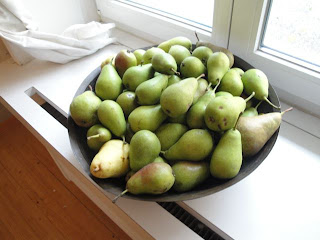 Speaking of light, Jitoku, June and I went to the Seattle Art Museum yesterday. Among the exhibitions were seven paintings by Andrew Wyeth presented in tribute to his life. He died earlier this year. I had seen a retrospective of his work many years ago at the Philadelphia Museum of Art, but the seven paintings in their presentation were deeply moving. It was morning and there were few people so it was possible to stay with the paintings for as long as you liked. Six of the paintings were of Helga and one landscape. Helga was the German woman he met through friends who became his model, muse, and love. The paintings are infused with sensuality and feeling. Wyeth says that you can't paint if you can't love and he also says, "Finally, if a painting is good it will be mostly memory." There was a jolt of unexpected sentiment that hit the heart in seeing these paintings. I felt mixed in their world of deep abiding feeling as they both stood in the snow for hours in freezing weather while he painted the largest of the watercolor paintings he ever executed. You cannot look at these paintings and not get a glimmer of their depth of love, feeling, respect for one another.
Perhaps all of this is about light and how light plays on objects and what the light points to when an artist highlights a moment on the canvas. There is the brief stroke of the brush that points to a strand of hair, when light makes us feel something and we are taken into the play of life at that very moment. We are in Wyeth's direct experience and we complete the painting when we enter what he points to and feel what we feel that he felt.
Perhaps this is about the play of light on the forest floor and the moment when we see a shaft of sunlight through leaves. Perhaps it is about memory, a primal memory that functions also new in every moment that cannot expect anything but is waiting without waiting for the moment to reveal itself because we know at the great heart of everything who and what we are. A strand of light can say all this if we are vulnerable and open enough to allow experience.
P.S. The pears are a snapshot by my daughter at her open studio in Zurich. You can see her photography at ellenoconnell.com.
Posted by Temple Ground Press at 11:37 AM 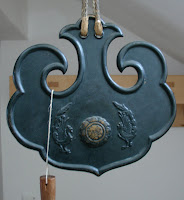 It's been awhile since I've checked in here to the blog. My apologies. Much travel, activity, moving about as I made the transition from Kannon-do to Olympia Zen Center and received our visitor from Belgium, Jitoku Josepha Vermote. Jitoku has been practicing at Zen River in Holland for the past two years and is exploring where she might live in the future as she nears the 70s of her life. Continuing in a hard practice/training center becomes difficult as we age and the question is where and how can we continue to practice in a way that is more moderate yet honors the vow of Okesa? We are exploring this question together.
Jitoku's first language is French although at Zen River she spoke Dutch and English. Here, she is offering many phrases in French as I do understand a bit. We've telephoned my daughter Laureen several times so Jitoku can feel at home in French and Laureen can get more experience in exchanging with a native speaker. I recall living in Japan and feeling elated when I could speak English even for a little while. I imagine that anyone feels this way when they are asked to speak a language other than their primary language for long periods of time. A deep homesickness develops in the heart when the most inner feelings cannot be expressed. Thus, I've encouraged Jitoku to say what she needs to say in French and we'll sort out the translation later. Also, I'm hunting around for a French speaker for her although it's a rare language in these parts.
You can practice Zen as long as you like, but language will still be necessary. We make a mistake when we think that Zen is only about silence. It is true that the deepest and true experience cannot be put into words, cannot be truly spoken in words, yet words are used to point toward the experience. We use words in poetry to point toward the unspeakable. Dogen Zenji's teaching is using words to point to the beyond. Ryokan san uses words in poetry to point to the mystical appearance of all the phenomenal world. We will surely go on speaking forever, using words that lift the heart and mind that give hope for a better manifestation of good.
So, Indian summer is here this week. Leaves are beginning to fall, the mornings and evenings are quite crisp, but the afternoons are warm and slow moving. The angle of the sun says that the autumnal equinox is here. The trees give a last wave. Autumn was Ryokan's favorite season. His poems are full of autumn leaves and the emotion of the dying time, the passing away of the year, the harvest moon hanging like a giant lantern in the sky. "Each year as autumn comes, the moon will shine as before and the world will watch it, will face it till eternity."
Looking around for the plan for one's life beginning at the 70's decade is like becoming the harvest moon. It is a passing along time and yet it is vibrant and full of life. It does its own work that completes the totality of the year, it demonstrates the totality of a lifetime. With so much yet to do, "Who will reflect the clearest moon in the lake of his mind?"
We explore.
Posted by Temple Ground Press at 8:42 AM

As we'd been speaking at Kannon-do about koan Mu, the first koan, I spoke about the second koan on Wednesday evening. The first koan is Emptiness. The second is that we are subject to causality. We cannot just do anything we want, and if we were truly realized in Emptiness, there would be no question about ethical action. We would simply act ethically, morally, in all our interactions because it would not be in our capacity to knowingly harm.
We've only to look in the news right now to see that many people get to favorable positions in government only to discover that they are not free to behave as they wish. We h
ave standard rules of behavior that we follow in society and we are bound by them because they are guidelines for fair treatment of others. There are consequences for whatever we do. If the butterflies in the eastern hemisphere flap their wings, the eastern hemisphere experiences wind.
I said I thought that the second koan ought to be the first koan. We ought have some development in understanding right behavior before we venture into the experience of the first koan. Tibetan Buddhism, so far as I understand, does their developmental practice in this way. First they study and understand the nature of Buddha's teachings, and later after many years of study, they venture into experience. Zen practice begins with experience and later goes toward study. Perhaps this was all right in cultures that have strong behavioral pressures in cultures such as China, Korea, and Japan. We have few social pressures in America and perhaps it is this that has given rise to misunderstandings about what we can and ought not do. It's not so easy to survive a scandal while living in Japan as one can in the U.S. When Asian teachers come to the U.S. they misread the culture and think anything is okay. This is a great misunderstanding of the Buddha's teachings. We are not free to forget the Precepts, and actually, living the Precepts fully is complete freedom.
We are subject to causality. There are no actions we can take that do not have repercus
sions. For every action there is a reaction. So, the second koan is to fully realize this and to integrate it completely with koan Mu, Emptiness, and understand the Buddha's awakening as one of interrelated activity and relatedness to all beings, past, present, and future. 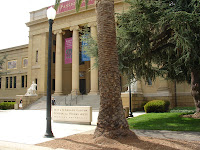 So, at the same time I was giving the talk at Kannon-do, some family were visiting from the east coast and points north. We went to the Leland Stanford Jr. Museum now known as the Cantor Center for Visual Arts. Years ago I worked at Stanford. An Australian researcher had been offered a position in one of the labs and nearly turned it down because he thought he didn't want to work at a junior college. Someone explained to him about Leland Stanford Jr. and the meaning of Stanford University. Needless to say, he accepted the position.
The museum is wonderful. I was thrilled to see a whole wall of Robert Motherwell collages, although not my favorite works by Motherwell. Nevertheless, ones to be studied and appreciated. Motherwell is an alumnus of the School of Philosophy at Stanford. I was also delighted to see several large Diebenkorn paintings. And, the largest collection they have is naturally the Rodin collection, the largest outside of Paris. Always excellent to take 5 or 6 of them and look closely. If you try to take and study all the Rodin's at once, you'll be overwhelmed as there are three large rooms devoted to his sculpture.
The weather remains golden and dependably fair.
Posted by Temple Ground Press at 11:05 AM