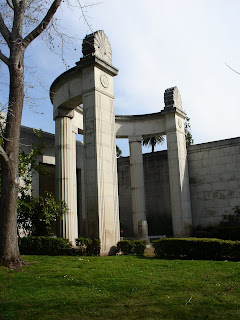 For the past several years, on Memorial Day or Veterans Day I've posted poems by my brother John Carney who is a Vietnam vet.  John writes poems in tribute to the lives of those who serve their country.  This poem is a new one for Memorial Day 2011.


THEY WENT
Many have given their lives,
Because they were called to war,
Often lonely and afraid,
On some distant foreign shore.
We tend to recall the names,
Of big battles that were waged,
Such dubious distinction,
Where horror and conflict raged.
But many comrades too,
Were lost along the way.
A little known town or hamlet,
In some empty field they lay.
Who has heard of Samawah.
Outpost Harry, or Ong Thanh,
Kesternich, Wanat,
Or maybe Ap Tinh Anh?
Some fell from the air or were lost,
Manning posts on a ship.
Some were just driving trucks
On a simple supply trip.
Others were struck down by fever,
Or run over by a tank or jeep.
There's a lot of different reasons,
For how they met their sleep.
Not knowing what the price would be,
Or the cost they'd have to pay,
They packed their bags and kissed goodbye,
And we sent them on their way.
So on this day of remembrance,
It's not how or where they fell,
Not about huge battles,
Or valiant tales to tell,
Nor any kind of discussion,
Of the reason they were sent.
We honor them in thought or prayer,
For the simple fact they went.
John Carney - 2011
Posted by Temple Ground Press at 9:42 PM

Sleeping Through the Alarm Bells

This Letter to the Editor in the THE OLYMPIAN on May 15, 2011, was written by Barbara Monda and is reprinted here without permission, but the message is urgent and I feel hardly anyone could object to furthering this call to action.


I plan to set my alarm for 6 p.m. every Sunday evening and will ring our 'Zendo wake-up bell' for five minutes joining Barbara Monda.  This seems like a simple thing to do, but imagine if we all did it, what actions and demands on our corporations and governments we might wake to.

"Today in global news: "Global mercury emissions could grow by 25 percent by 2020."
"That's certainly a threat to all life as China, India and South America enter the race for energy consumption and pollution once monopolized by the industrial U.S. and Europe.
"Closer to home, there is discovered a huge level of dioxins in Budd Inlet.  It is not disputable that these kill.
"According to the U.N., world population will reach 7 billion to 10 billion by 2050.  This is beyond the earth's ability to sustain a healthy biosphere.
"Everyone knows dioxins and mercury kill.  Everyone knows people are sick or have died because of impure water, tainted food, airborne toxins, radiation, new germs and viruses developing because of weakened hosts.
"Now add to that the industrial family of mega-corporations working very effectively to kill environmental controls and protections.  The TV is full of their million dollar ads to convince a dying people of how safe they are without government interference.
"The number one threat to human population on this planet is humans populating and the polluting effect of their existence, enhanced or caused by monetary greed and thirst for power.
"The consequences are so frightening, we avoid its reality.  We hide, get distracted.  We sleep through all the alarm bells.
"I propose we wake up.  Every Sunday at 6 p.m., I will ring earth bells to alarm us to the threats of ecological disaster.
"Join me.  Ring loud."
Barbara Monda, Olympia
Posted by Temple Ground Press at 9:37 AM

The days run away... 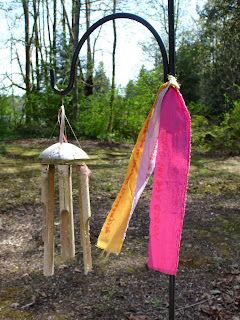 ...like wild horses over the hills.  This, I do believe, is the title of a poetry book by Charles Bukowski.  The days do run away is how it seems.  Perhaps this is preferred than to sit around bored and wishing for someone to show up to make something happen.  But the days do run by and it often feels as though nothing gets done, nothing gets accomplished.  Bukowski says that that is how it should be.  His gravestone says, "Don't Try."  In a letter to John William Corrington in 1963, Bukowski wrote that someone asked him about his creative process and he answered, "What do you do?  How do you write, create?"  You don't, I told them.  You don't try.  That's very important; not to try, either for Cadillacs, creation or immortality.  You wait, and if nothing happens, you wait some more.  It's like a bug high on the wall.  You wait for it to come to you.  When it gets close enough you reach out, slap out and kill it.  Or if you like its looks you make a pet out of it."

Michael Long will enjoy that quote.

I'll wait for the right words of prayer and poetry to write to hang in the garden tomorrow for the Day of Prayer and Healing for Japan.  Meantime, there's the sun today, and the sky is high up and deep blue.  This day too will run away...
Posted by Temple Ground Press at 9:40 AM

Ten years ago on May 10th, Maylie Scott, a Zen teacher at Arcata Zen Center, died.  Alan Senauke who was her Dharma brother and friend, inherited responsibility for her teaching in Arcata.  He writes in his blog today at Clear View Blog about Maylie.  Maylie had a particular interpretation of the Metta Sutta and I print it here while remembering her on the anniversary of her death.


"Maylie reworked the Metta Sutta, the Buddhas discourse on lovingkindness into a prayer, blending her own words with the Buddha’s.   The unique point of this prayer emerges in the next to last line: “…our peace in the world is a result of our work for justice.”  The notion of  “justice” is not commonly found in the Buddha’s teachings, and some people are uncomfortable with it.  The Buddha often spoke of “just” or correct, in balance.  The Western image of Justice is a blindfolded woman, impartial even to her own preferences, holding a scale.  Justice is about balance, finding the proper balance in our lives and in our society. Maylie was passionate about social justice without turning away from her adversaries, without seeing them as less than fully human.  And in her steady everyday devotion to zazen, she was again and again finding balance, finding what was just in her own life."— Hozan Alan Senauki


Metta Prayer
May I be well, loving, and peaceful. May all beings be well, loving, and peaceful.
May I be at ease in my body, feeling the ground beneath my seat and feet, letting my back be long and straight, enjoying breath as it rises and falls and rises.
May I know and be intimate with body mind, whatever its feeling or mood, calm or agitated, tired or energetic, irritated or friendly.
Breathing in and out, in and out, aware, moment by moment, of the risings and passings.
May I be attentive and gentle towards my own discomfort and suffering.
May I be attentive and grateful for my own joy and well-being.
May I move towards others freely and with openness.
May I receive others with sympathy and understanding.
May I move towards the suffering of others with peaceful and attentive confidence.
May I recall the Bodhisattva of compassion; her 1,000 hands, her instant readiness for action, each hand with an eye in it, the instinctive knowing what to do.
May I continually cultivate the ground of peace for myself and others and persist, mindful and dedicated to this work, independent of results.
May I know that my peace and the world’s peace are not separate; that our peace in the world is a result of our work for justice.
May all beings be well, happy, and peaceful.
— Maylie Scott, 1994
Posted by Temple Ground Press at 7:17 PM

All things are temporary

Days, words, events, even blogs are temporary.  Being away from blogs is temporary.  The weeks in preparation for David Loy's appearance for the 10th Annual Ryokan Lecture have been busy as I've eased back into daily life in Olympia.  Or did I come crashing in?  Believe me, the sense of light is an extraordinary change when someone is attuned to light, landscape, and color.  We had the coldest April on record and perhaps not the wettest, but it was plenty wet and grey, gray.  Payne's gray.  We are still getting only an occasional brilliant sky which is followed by another long period of falling water. 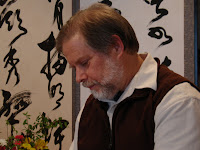 Loy began the workshop on Saturday by telling us about the origin of his writing the book, LACK AND TRANSCENDENCE and about the trilogy of his books, the connected unfolding and exploration of his basic thesis in Buddhist studies.  From there, we moved into a day of dialogue with him that flowed from the nature of the Self/No-Self to the work of the Self/No-Self in the social context.  From there we discussed the importance of story in the human experience and then ended with specific questions about the book LACK AND TRANSCENDENCE which the Sangha had taken up for its annual study.  For me, I took not one note but listened intently allowing the teaching to wash through me as the Dharma soaks into the blood.  I apologize that I have not one quote to give you which you may have been hoping for, to give you the feeling that you were there.  You can find Loy's work online and make your way to the text of his lecture on Healing Ecology at David Loy's website.

So, it was a rich exchange over this weekend.  Now we go forward with daily life, Zazen each morning, and preparing for A DAY OF PRAYER AND HEALING FOR JAPAN on May 21.  More thoughts to come as I begin to gather myself together and still transition into life in the north.

I think I'll include a very recent poem which speaks to grief, art, expression, loss, the human condition.


“Trodden Weed”
The title does not reveal the power of the man’s boots,
his determined stride across a deserted, colorless plain
somber snowy hill in the distance.  No sky.  Just the hem
of a black coat brushed at the top of the painting.
This is all Wyeth gives us
except for the single weed beneath the right forward foot
that must be searched out on the landscape as it disappears
in the tangled wintry meadow.  It’s a nameless
thing, the weed, snuffed out by capricious footfall
a juxtaposition of place and time
of purpose and what is easily broken.  We’d almost expect
to see spurs, the buckle fed through a notch on the bridge
of the ankle.  These large feet suggest lungs that heave
with the effort of movement.  And yet, and yet
we know nothing of this man
where he is going or coming from.  What of his hands?
Does he carry a rifle?  Is there anger in his stride?
Is he walking toward rescue, vengeance, or is it escape?
Is he sure of himself, or turning from sorrow?
Is he moving toward someone he loves?
It’s as if these boots that can tread on fields with ease
are shielding a wound, a grief so deep
that someone can’t survive except by edge and sway.
A loss that eats the heart from inside out
freezes tears in their welling.

Posted by Temple Ground Press at 11:47 AM