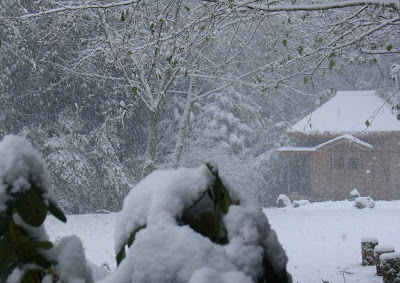 With blessings to one and all on Thanksgiving Day and throughout the holiday season.
This is a view of Gogo-an earlier this week when we received our first snowfall of the winter.  Frigid temperatures followed and the landscape remains wintry and picturesque.


On Wednesday evenings, we always chant the Heart Sutra, and following this we offer a dedication of our practice.  On this Thanksgiving Day, I'm including here, in brief, those expressions of gratitude as they have deep meaning and intention for us all.


For Our Many Benefactors

We celebrate the teachings of the Buddha Dharma which bring light and hope to the many realms of suffering, and lead to ease and joy.  These teachings are offered here at Ryoko-an because of the goodness and generosity of all our many benefactors.
We offer the merit of this chant to all those who aid and support our temple through myriad expressions of generosity.  May all our benefactors gain wisdom and compassion from all they meet and may our sincere vows to practice together be realized in the Enlightened Way.
For the Welfare of Families and Children

We celebrate the teachings of the Buddha Dharma which bring light and hope to the many realms of suffering, and lead to ease and joy.  These teachings are offered here at Ryoko-an in recognition of the many families who support our practice.
We offer the merit of this chant to all families and particularly to the health and welfare of children.  May all families receive the protection of the Dharma and be shielded from misfortune and disaster.  May we in our sincere vows to practice together, exemplify the teachings of Buddha and realize the Enlightened Way.
For Those Courageous Enough to Lead Us in Governments Throughout the World

We celebrate the teachings of the Buddha Dharma which bring light and hope to the many realms of suffering, and lead to ease and joy.  These teachings are offered here at Ryoko-an in recognition of the effort of all those courageous enough to lead us in governments throughout the world.
We offer the merit of this chant that those who take leadership positions may be led by wisdom and truth.  May our nations learn to live in peace.  May we in our compassionate practice keep the mind of hope and dignity alive in support of justice and equality and may our sincere vows to practice together be realized in the Enlightened Way.
Posted by Temple Ground Press at 11:43 AM

Each year at Veterans's Day or on Memorial Day I post a poem by my brother John Carney who is a Vietnam Veteran.  He writes poems about military patriotism and poems that question war.

WHO UNDERSTANDS
John Carney 5/29/2010
Who fully understands
The meaning of this day?
The parents, spouses, sons and daughters
Who waved them on their way?
Is it the comrades in their midst
Who saw them where they lay?
Many do not comprehend
And some may not even care
That the sacrifice that was made
Is a bond that others share.
And this is not a matter
It is not the important thing
As they laid down their lives
That only some then felt the sting.
What is important for us all to know
and to realize in some way
Is that the meaning of this time
Though passion only some display,
Is we are a country, we are a people
And this liberty we hold so dear
Is kept alive by our willingness
To respond when threats appear.
It may be arguable or seem wrong
And with that make some outcry
Against the leaders and their acts
Have them explain their reasons why.
But do not let this day go by
Without some pause for thought
For the fallen and their loved ones
And their comrades who also fought.
As as a nation, as a people
And our actions in this world
We should recognize and honor
Today when the flag's unfurled.
It's one time we should all realize
It doesn't matter if you fully understand
But take some time to respect such cost!
They died in service of our great land!
Posted by Temple Ground Press at 7:16 PM

Priest in Need of a Car A priest in Washington on a very low income is in need of a car since her car died of old age.

If you have a car you were thinking of selling and would consider donating to a great cause, please notify us through the website

This coming weekend, San Francisco Zen Center will present The Zen Translation Forum, a program celebrating the publication of SHOBOGENZO, edited by Kaz Tanahashi and including a host of translators and scholars.


The program will be held at three venues in San Francisco:  City Center, Fort Mason, and Green Gulch.  The afternoon programs will be on Live Stream and you may tune in and enjoy the panel discussions and presentations from wherever you are.

I will be presenting on Sunday afternoon at Green Gulch.  My subject is Dogen's View of Women and I'll speak about that, of course, and also present the book project that Soto Zen women priests are working on.