The Genuine in Us 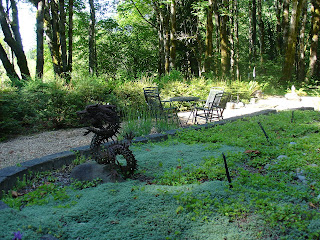 Since back from Switzerland I've been scurrying to catch up, get myself past that difficult bout of virus, and settle in for the beginning of summer. The grounds require so much care these days because the rain has caused extraordinary growth. There are billions of weeds and tree seedlings. We'd be overgrown in half a year if we didn't continually keep the gardens combed.
Last Wednesday evening I gave a talk on a subject I'd been thinking about: being genuine. Earlier in the day, I had opened a book I refer to for my writing or daily thought which had been recommended by Jeanne Lohmann. The book is a compilation of daily quotes that encourage deep thought and encourage the spiritual heart. The quote was on the subject of "the genuine" and I naturally read the quote at the talk.
The book is, AN ALMANAC FOR THE SOUL - Anthology of Hope by Marv and Nancy Hiles which is only available from Iona Center, PO Box 1528, Healdsburg, CA 95448. (707) 431 7426. ionacenter@comcast.net.
I offer the quote for June 23 here with hopes I won't get in trouble since I've given a recommendation here.
"Listen to the sound of the genuine within you. Small, Einstein said, is the number of them that see with their own eyes and feel with their own heart. How to be one of them? The black theologian Howard Thurman said that there is something in each one of us that waits and listens for the sound of genuine in ourselves, and it is the only true guide you'll ever have. If you cannot hear it, you will all of your lives spend your days on the ends of strings that somebody else pulls. You will find that when you leave here there are so many noises and competing demands in your lives that many of you will never find out who you are. So I hope you will learn to keep quiet enough to hear the sound of the genuine within yourselves so that you can hear it in other people too."
"The Well-Lived Life Is A Search for Substance" by Marion Wright Edelman
Posted by Temple Ground Press at 5:25 PM 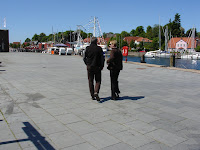 I arrived on Tuesday in Hamburg and Harald picked me up at the airport. We passed through the rolling hills on a 1.5 to 2 hour drive north to Lindau 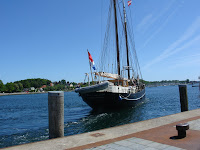 where Wind und Wolken Sangha meets in the Zendo beside the house where Friederike and Harald live. The back windows overlook large grain fields. There is a dairy down the street and we can occasionally hear cows chatting together. The day I arrived the sun came out and it has been lovely ever since.
We sat Zazen on Thursday evening, I gave a brief Dharma talk, and I was happy to see so many members continuing their practice in this sweet Zendo and very joyful Sangha. Two members will receive Jukai on Sunday after a Sangha day of practice on Saturday and early morning practice on Sunday. Following this we'll have a banquet celebration, which should technically be called a potluck lunch, but as the German cooks/bakers are so good, it really turns into a feast. There will be much chatting and laughter, such a good humored group they are.
Yesterday, we strolled along the inlet at Eckernforde where it meets the Baltic Sea. The blue, deep sky made the water an unusually beautiful grey/blue. Fishermen had just come in with their catches and were selling fish from their boats pulled alongside the dock. We had lunch at a little fish stand and sat happily in the sun for a nice hour enjoying the conversation and sights.
Later in the afternoon two visitors came to the house. Rev. Doko Waskoneg, the only woman Soto Zen priest in Germany. She has her Zendo and Sangha in 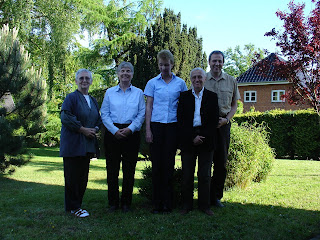 Hanover. I visited her for the first time last year with Friederike while on our way to Nurnberg. The second woman was Ritsunen Gabriele Linneback who is the first woman translator of SHOBOGENZO, rendered in German and only recently published in four volumes. It took her 20 years to complete. She is a student of Nishijima Roshi. Rev Doko will also publish her first book in July. It is a commentary on several fascicles by Dogen Zenji. Rev. Doko is a Dharma heir of Nishijima Roshi.
(In the photo left to right: Eido, Gabriele, Friederike, Doko, Harald)
It was a great honor to be with these women, not to also mention the company of Friederike and Harald. We had a jolly time discussing the tribulations of translating into German and the great difficulty of it compared to English. Gabriele had the opportunity to live in Japan during some of the work and she had access to Nishijima Roshi which was of great assistance.
We also visited Volker, a Sangha member who received Jukai last year, and held a memorial service for Volker's wife who died three years ago. Today we visited Dieter and Jytte who will receive Jukai on Sunday.
Everywhere we've gone it has been most wonderful to be so welcomed.
Posted by Temple Ground Press at 9:06 AM