The White Tower and Constantinos Speras

I thought I had gone as high as I could go on the island with my climb at the Hora, but I went out with Leonardo again who stopped by his home to pick up something on the way to Mega Livadi.  This was the view from his place, looking down on the Hora and the edge of Livadi where I'm staying.  Utter silence and stillness except the far cry of a hawk and a bit of wind.  A breathtaking moment. 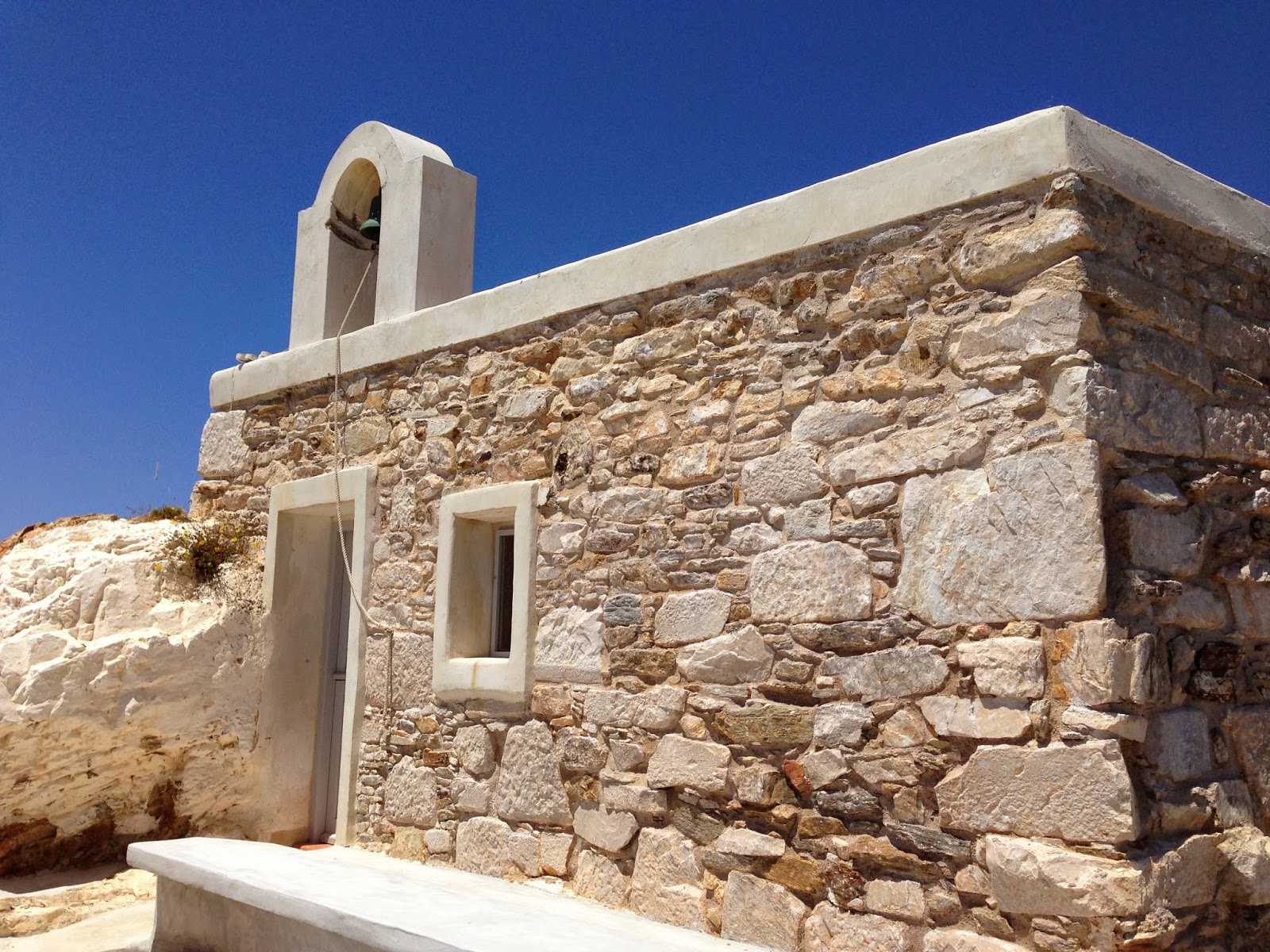 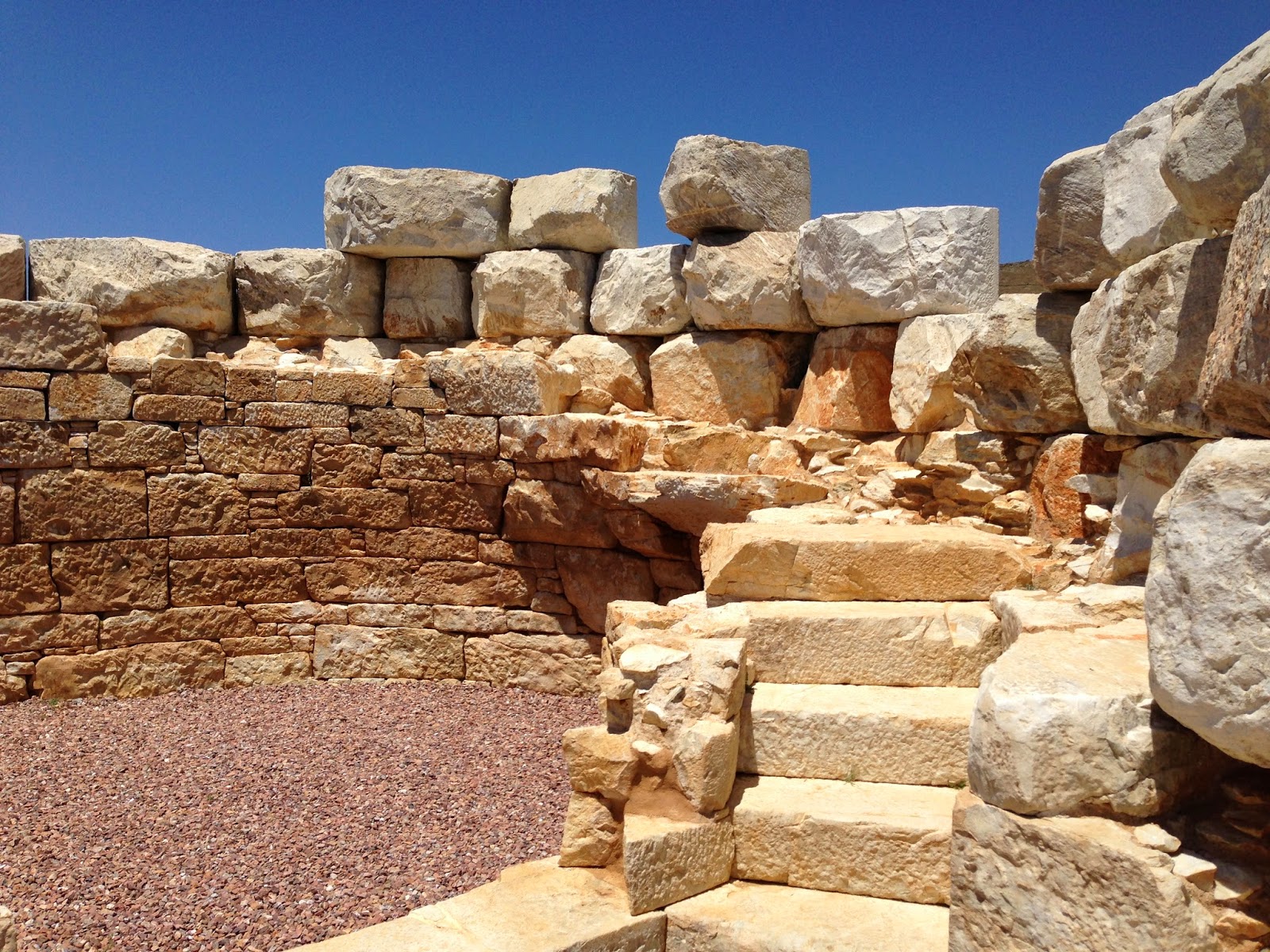 We drove then across the island and stopped at the White Tower.  Towers such as these were built  in many parts of Greece but were numerous across the Cycladic islands from the 4th Century BCE in order to protect the resources of the islands against marauders.  This tower appears to be protecting the area of the island that was rich in metals and thus used for mining.  Judging by the artifacts that were found at the site when archeologists began a partial reconstruction, this tower was built in the 4th century BCE and was in use until the 7th century CE.  The massive local white marble is reminiscent of stones at the Acropolis which were commonly used in construction.

The diameter of the circle is about eight and half meters.  The blocks were skillfully joined and set with no binding agent. It likely had three stories and was twelve meters tall.  This is surmised by the 750 marble blocks that are sitting beside it in a kind of block marble graveyard.  In the early part of the 20th century, when mining was again at its peak, a cemetery was built on the site using some of the marble as headstones, as well as a small church.  Unlike the experience in Athens where guards are everywhere to keep people from touching the marble at the Acropolis, you can walk inside this White Tower and put your hands right onto the marble from these ancient times.

On we went for lunch at Mega Livadi and a brief history lesson about the mining symbols we are painting on the mural downtown.  I learned about the Mine Strike of 1916 from the people who run the taverna in the square.  When the mine workers on Serifos were desperate for help, they called on Constantinos Speras, a man who had been born in Serifos in 1893 and was working to assist the labor movement in Athens and on another island.  Speras returned and organized The Union of Working Men and Miners of Serifos, and as its president, he defended the rights of the workers, ultimately calling a strike in 1916.  The workers had almost no rights, worked during all light hours, seven days a week, and as was reported by the man who lives at the mines and told this history, the men were not even permitted to take a moment to pee.  When the workers put down their tools, the owners of the mines called in the police.  This escalated into a face off between the two groups and the miners were given five minutes to make their decision to go back to work.  When they refused, violence broke out.  Three miners were killed and one policeman.  In this melee, the wives of the miners and the women of the town came to the assistance of the miners by throwing stones.  A pregnant woman who participated in the fight, took responsibility for the death of the policeman and she went to prison where her daughter was born.  This daughter had a son who now lives on the same mountain today.  Speras was also arrested and put in the jail on the site.  He was not there very long as the miners tore down the door of the jail and released him.  Ultimately, Speras and the workers won and their demand for an eight hour work day was agreed to.  This tribute to Constantinos Speras stands in the little square at the village on the site where the tragedy took place.  The matter of the mines and its history is right now being painted on the mural wall in downtown Livadi, as you've already seen.  The wall is coming along; it's coming toward its magnificent finish.
History books record Speras as an anarcho-syndicalist and a pioneer in the working class trade unions in Greece.  A man of great courage and determination, he was arrested, imprisoned, and exiled an impressive 109 times in his lifetime.  He was ultimately assassinated in Athens in 1943.

An example of a contemporary anarcho-syndicalist is Noam Chomsky.  There is plenty of information to find online if you are interested in this political theory.
Posted by Temple Ground Press at 7:36 AM